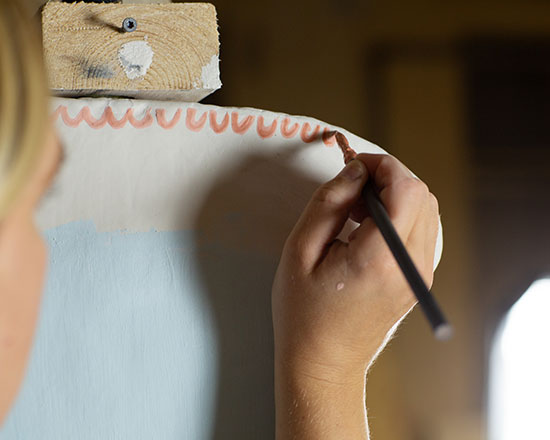 Marthe Elise Stramrud challenges the possibilities of ceramics in her new exhibition at the Trondheim Art Museum. A series of new colorful sculptures on an almost impossible scale rise like large bodies in the exhibition rooms – with lots of joy and splash. 1.8 tonnes of clay is shaped, raised, glazed and fired.

This is the critically acclaimed artist’s first solo exhibition in Trondheim. With a background in photography, the artistry revolves around everyday objects and familiar things, with a twist. In recent years, ceramics have gained a lot of space, where she explores form, material and the function of the object of use. Glazed with lively colors and rough brushstrokes, the large sculptures become canvases, with an almost naïve expression. Stramrud joins a long line of female artists who have ventured into traditional crafts and pushed challenging genre boundaries.

“We are looking forward to showing these new works on the entire 1st floor at TKM Gråmølna. Marthe Elise Stramrud is known for her exploratory and playful attitude to materials, traditions and expression. She pushes the limits of what is physically possible, and the limits of what a sculpture can be. The exhibition will also show works from the museum’s own collection – which will both engage in dialogue with and be challenged by Stramrud’s large, colorful ceramic works.” – Christina Undrum Andersen, curator of the exhibition at Trondheim Art Museum.

1.8 tonnes of clay and seven sisters

One of the new sculpture series has been titled “Seven Sisters”. The series shows seven two-dimensional vases in almost human size. The title may refer to the legend of the Seven Sisters mountain range in Nordland, the waterfall in Møre og Romsdal, or the ancient Pleiades – seven guiding stars used for navigation. They refer to a sisterhood, a series of bodies with slight variations, erected in a row. In Marthe Elise’s distinctive play of form and material, a tension arises, a new dialogue between surface and depth, between the two- and three-dimensional, between figuration and abstraction. 1.8 tonnes of clay is shaped, raised, glazed and fired.

Oslo-based Marthe Elise Stramrud has a master’s degree from the Academy of Fine Arts in Oslo (2018) and a BFA from the Academy of Fine Arts in Bergen (2011). She has had several solo exhibitions and participated in a number of group exhibitions in recent years. In addition to large decoration projects, her works have been purchased for several private and public collections, including the National Museum, KODE Bergen, Sørlandets Kunstmuseum, KORO, Oslo Municipality’s art collection and Art in the Workplace. Stramrud has been awarded a number of grants and prizes for her work and has recently published the critically acclaimed book “Ceramic fact information” (2021), which contains a reinterpretation of the Tangen collection’s blind spots and presents an alternative collection with 76 female artists, a fact information printed in ceramics.